At this point you should have Balsamiq installed on your computer to begin wireframing the proposed site. For more information about what I’m doing I’ve written an article and posted a video that should get you up to speed. The video is only about 4 minutes so if you’re not sure what this is about, please take a moment to watch it. The link to both the article and the video is here.

In this article and video I jump into Balsamiq and start with the layout. I make some mistakes along the way and I ended up clipping off about 3 minutes of the video because I made a very big mistake. I made the error of thinking that if I added a link that saved it to a duplicate page, that the link would be transferred over to the page Balsamiq created. Oh well, did I mention I’m learning? 🙂

The video goes over the menu, canvas, option window and adding assets. I touch on how to crop an image and changing items on different elements on the canvas.

Alright, so I mentioned in a previous article that I decided to blog as I learned Balsamiq Wireframing. I’m not going to go into why I am just now learning wireframing, you can read the article when you get the chance.

The first step in any project is that we have a goal and a means to meet that goal. This project was given to me by a friend who wants a web site that will allow him to monitor his art project. Pretty simple, right? Well, not really. When I questioned him further it turns out that it could end up being beyond my web capabilities, but I wanted to give it a try. So here is the brief.

What I was told

The idea behind his art project is to create many (unknown the exact number, but probably about 100) small sculptures that would be cheap to make and would last a while. They would probably be made out of some tough resin so each one will last. I don’t know the exact size, my assumption is that they are about 12″ tall. Each sculpture would be placed around the US by people that he knows. An example would be that person A would place it at the corner of a street in Chicago, person B could leave it at a metro station Dallas, Texas. You get the idea, a hundred of these scattered around the US.

What he wants for his site:

He wants a site that would record what happens to each of the sculptures. A way to log the location and any other information that a person would be willing to add. Each piece would have a distinguishing mark or number to identify it and the web site url. The sculptures would not have any aids like a sensor to record where they are. The info must be added by a person.

After that there isn’t too much info about the details. He’s not sure if gps should be used or if just someone using a form to add information is enough. He did mention that there needs to be as little information about the project as possible. In other words he wants to see what happens with the pieces without interference from anyone. If the sculpture get thrown away, that’s fine.

That’s generally what I know about the project. I am leaving some info out because it’s his project and I don’t want to broadcast it without his permission.

What is needed for the site:

These are my initial thoughts and until I change them, the wireframing will be based on them. He may come back and want something different, but for now I’m going to proceed this way.

How I’m going to proceed with Balsamiq:

I think four pages are needed, remember that less information is wanted.I think that’s it. It sounds really simple on the surface but the development of the backend may be difficult.

Okay now that the basics are complete I hope that you follow along as I create his site in Balsamiq. Remember, this is about learning wireframing and all the other stuff is not important. What I mean by that is that it is entirely possible that WordPress (or some other program) would be able to do what he wants with less hassle. 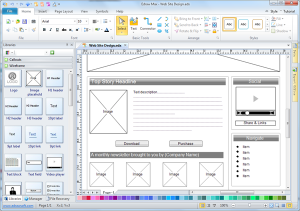