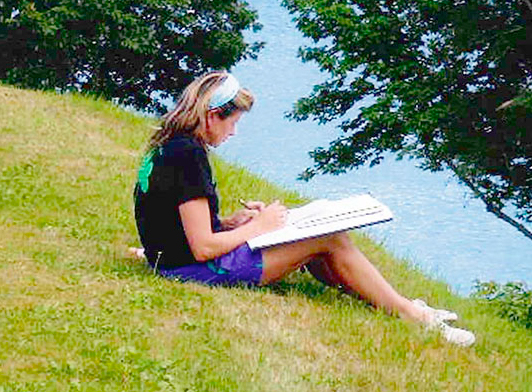 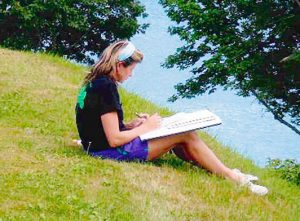 About three weeks ago I decided to sit down with a good friend and former colleague to ask her a few questions to get her take into what it’s like to be an accomplished artist, I also wanted to hear the process that she took to get there. I think it’s safe to say that in many ways Julia Townsend is renaissance woman with wide-ranging skills from painting to sculpture and long distance running to sea kayaker. If there is anything that she is not capable of doing I haven’t seen it yet.

Julia has lived and worked as an artist all around the world from Germany to Dubai. She is currently living with her husband in Edenton, North Carolina, where they run the Peanut Factory (PF). The PF was a former, you guessed it, peanut factory and through which she and her husband are converting to art center. From what I understand the PF is becoming a center for all things art. It is currently hosting artist’s residencies and they have just finished a gallery for exhibitions. She plans on adding a restaurant and housing for the visiting artists as well. END_OF_DOCUMENT_TOKEN_TO_BE_REPLACED 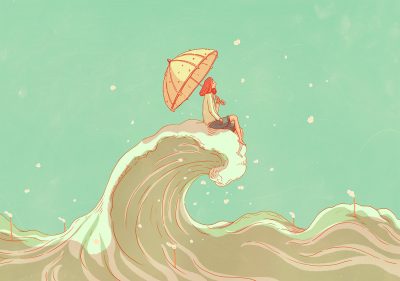 I’m not sure why, but I’ve been on a real illustration binge lately. While I was going through my twitter feed and ran into a talented artist that creates some of the most interesting illustrations that I’ve seen in a while. Don’t get me wrong, there are a lot of great illustrators online, and many have great work as well. It’s just the work of Wenyi Geng just struck me somehow. If I were forced to give an answer why I enjoyed his work, I’d say that I think it’s is use of line mixed with the pastel colors that really caught my attention the most.

Most the pieces that I looked at were playful and fun. The one that drew me into his work was of a of a fully clothed woman riding a wave while holding an umbrella. If I had that kind of  creativity, I would say that it’s straight out of a dream, but I don’t. I can only enjoy Wenyi’s work. That piece in particular, gives the impression that the artist has incorporated some of the ukiyo-e style into it. The ukiyo-e style is best identified by the woodblock print of the Japanese artist, Hokusai.

As far as I can tell on my quick examination of his work, none of the pieces are labeled by name or size. So my only way to identify them is by the content of the work. Another piece that I enjoyed was of a bird drawn in a playful manner. I think that’s the only way I can describe it quickly. Since this isn’t a critique, just my observations, you’ll have to cut me some slack. This piece is child-like and fun, and plays with one of Dali’s most famous pieces, The Persistence of Time’s melting clocks. Only with Wenyi’s work he’s replaced the melting clock with a melting orange slice. To a lesser degree I get a sense that there is a touch more Surrealism in his work. I can’t help but feel that the artist is taking a cue from Magritte as well. Though I can’t tell why, it’s just a feeling.

After doing some research online I’ve found out a little bit about him. Wenyi Geng was born in Japan, grew up in China, studied at SVA MFA Illustration and currently based in Tokyo Japan. Before writing this article I had not heard of him so I didn’t know if he was up and coming, or already established. I’m going to say that I’m embarrassed to see that he is very recognized in his field. I realize that I can’t know everything about the artists that I profile on this site, but Wenyi has been featured in at least three magazines. The magazines are listed on his personal site at http://www.wenyigeng.com/ in the about page. Other than that there really wasn’t that much more about him. I think it’s great that he’s getting the recognition that he deserves. 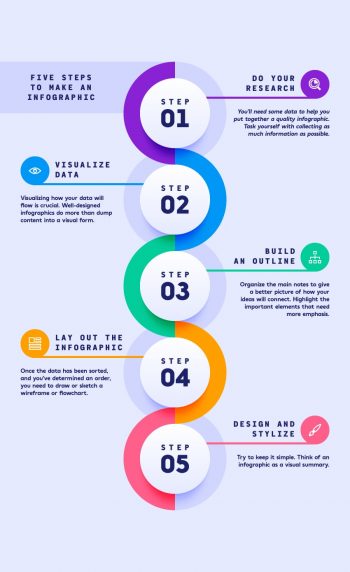 As a graphic and web designer there are a lot of different requests I get from clients. One that I haven’t needed to do in some time is to create an infographic. That being said, I think it’s at least a good tool to have in your “tool box” if the need ever arises. That, and considering that as part of my plan for this site I like the idea of adding a mix of different areas of art I think this is a great addition.

This post is about creating infographics in Adobe Illustrator by Andrei Marius. The article appeared on tutsplus.com and if you’re interested it seems to be a comprehensive step-by-step guide to the process. I do have to acknowledge that I haven’t done the tutorial yet, but given time, I will attempt it. I typically don’t like templates, more for personal reasons than any other, but the result looks pretty good. Good enough for me to give it a shot.

As mentioned, the writer takes you through the process at a beginners steps, “1. How to Create a New Document and Set Up a Grid” to finish at what appears to be a generic, yet very professional infographic. Like I said, I’m going to give it a shot if only to have a ‘fall back’ if I have to create one in  rush.

Update: I sat down this morning to do the tutorial. I mean it looks pretty good and like I mentioned in the article, we should all know how to do an infographic. Let me just say that the tutorial was really bad. The author made simple things difficult and relied on this sense of,” let’s use the tools that are pretty much useless unless we have tutorials making us use them.” Serious, I couldn’t finish the tutorial and I’ve been using AI since about 1997, and I’ve been teaching it since about 2001, and let me repeat, I couldn’t finish it. I did however sit down and do the infographic in about an hour just copying  what the image looked like.

I guess if you’re new to AI then maybe you’ll get something from it, but I think a better way to do it is too sit down and play. You’ll probably be more creative and maybe even do something interesting.