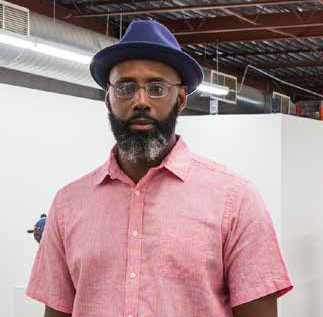 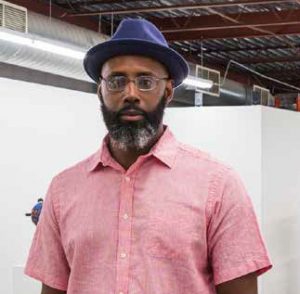 The latest artist interview that I had scheduled for this site was to be for a longtime friend, Corey Pickett, who is starting to make a name for himself in the art field. I use the word, “starting” a little loosely because by some measures, he has “arrived.” His work is topical and relevant to the current tone of society in the US. I don’t think it’s an exaggeration to say that I would expect his work to take off in a couple of years. He’s had solo exhibitions across the country and his work is currently being shown at ENMU, with a new exhibition in Sante Fe, that will be opening shortly. This December he will be showing in Pennsylvania too.

For this interview I decided to go in a slightly different direction than the past interviews, namely I wanted the interview with Corey to be a podcast. This was the first time that I’d done an interview like this so bear that in mind when you listen to it. I have experience with audio recordings, but I lack quality equipment and a true studio to conduct the interview. Also, in the back of my mind, I was hoping that this will be a regular method of interviews for Kennethcurtis.com.

His current work investigates the correlation of gun violence and firearm legislation.

For the interview we sat down and just basically chatted about his experience from growing up in the deep south to how he became a artist. We talked about why and how he chose the direction that he did, and where his work will be going in the future. It’s an interesting *listen*  if you’re an artist that’s just starting out, or you just want to hear about the steps someone made becoming a working artist. Listening to Corey’s story I’ll say that there is no single direction that he made to get where he is now. In his life he made changes to his goals and sometimes had to step backwards before he found the direction that he’s been so successful at now. If you’re interested in seeing all his work (or at least his work online) you can visit his personal web site.

He may be successful as a working artist right now, but he sees himself moving into other areas and mediums that have always interested him, like video. I’ll add a link to his MFA video that he completed in 2017, and my guess is that you’ll be just as caught up in it as I was.

The video starts by playing with imagery that exemplified stereotypes that most of society are aware of from our youth or maybe in history books. In almost no time the video gives us a glimpse into the world as seen from the other side of the imagery, and how it relates to African Americans in modern times. I would add also, that it shows the worst of race relations in modern times.